The Ciolo Bridge is located in the municipality of Gagliano del Capo and can be reached by travelling along the stretch of coastline that joins Santa Maria di Leuca to Marina di Novaglie; in practice, we are talking about that strip of land that the Latins called Finibus Terrae, i.e., the point where the land ended. Since 2006, Ciolo has become part of the Regional Natural Park Costa di Otranto - Santa Maria di Leuca - Bosco di Tricase, as well as being known as an archaeological site due to the presence of numerous caves, a typical feature of this jagged coastline. The name Ciolo derives from the local dialect and refers to magpies or crows. Apart from this, over the years this place has become a popular destination for many young tourists in search of a thrill precisely because of the height of the bridge from which they decide to dive into the blue waters below, although, it must be said, it remains a practice that should be forbidden because of its high danger coefficient. Nonetheless, the Ciolo Bridge remains a spectacle of nature. Built in the 1960s precisely to link the Leuca marina with that of Novaglie, today the bridge is to all intents and purposes a respectable tourist destination, well embedded in the marvellous landscape that this land offers. A further and no less important highlight, however, besides the bridge's suggestive height, is the area below it; in addition to the crystal-clear blue sea, this area is also known as the Canyon of Salento because of its characteristic coastline made up of rocky ridges, impervious rocks and the presence of numerous caves. Here one can admire the whims of nature by following an ancient path of the local fishermen who used to move from the centre of the village to reach the small beach. Along this stretch, where various excursions are now organised for trekking enthusiasts, the vegetation opens wildly before our eyes in a mixture of Mediterranean scrub with the presence of myrtle, lentisk, the Leuca carnation and other species typical of native vegetation. The place as a whole remains a marvel of nature, so if you come to the Salento, don't forget to make a fixed stop at Ponte del Ciolo, the spectacle is guaranteed. 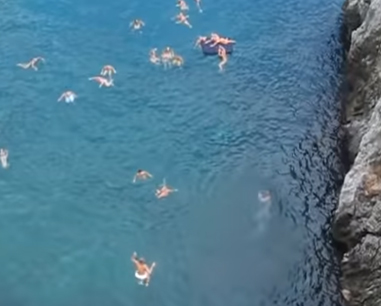 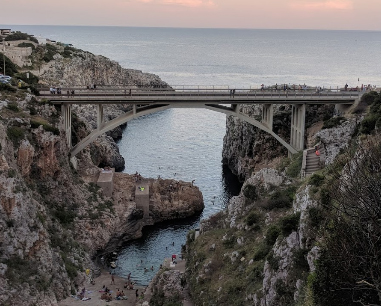